Zhaan was crabbing when being ridden, was reluctant to canter on a left lead and appeared to have sciatic pain in his spine. These problems had been occurring for a few weeks.

Zhaan improved significantly after just one Equine Touch session, able to canter freely on a left lead. After the third session his sciatic pain now appeared to be gone, and he was observed doing body stretches in the paddock – something he never did before being given Equine Touch. 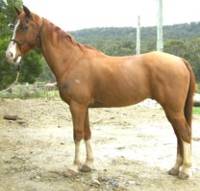