This gelding had poor circulation and muscle tone. He had sacroiliac and nerve pain in his back, causing him to buck when ridden. His coat was also dull and flat.

The day after Billy’s Equine Touch session, the client sent me a photo, as she was so impressed with the change. Equine Touch increased circulation and released the traumatised muscles allowing Billy’s rump to recover overnight. The dramatic improvement continued over two further Equine Touch sessions until Billy was a different horse, and had stopped bucking entirely. 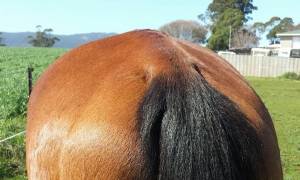